Salvation is of the LORD

THE HISTORY OF BENHAR EVANGELICAL CHURCH

In 1901, a corrugated iron sectional building was erected in West Benhar. It was dedicated as an Evangelical mission hall and was affectionately known as the ‘Tin Hall.'

In 1922, the mining community of West Benhar experienced a move of the Holy Spirit, a spiritual awakening, that resulted in the salvation of many people from the village and the surrounding district.

In 1929, the miner's rows in West Benhar were demolished and the Tin Hall was moved to Edinburgh Road, Eastfield, where the work continued until 1972.

Benhar Evangelical Church continues to carry on the work that commenced over one hundred years ago in West Benhar, by preaching the good news of Jesus Christ, and teaching God’s Word in the village of Eastfield.

THE ORDINATION AND INSTALLATION OF OUR FIRST AND CURRENT PASTOR

On the 8th of October 2011, an ordination and installation service were held the church building for its first pastor, the Rev. Ian S.D. Loughrin.

Present on that occasion were members and adherents of Rev. Loughrin’s former church and present congregation.

Also present were Ministers and Elders of other churches, relatives, friends, and visitors from various places.

Rev. McCrea, in addressing appropriate questions appointed to be put to Ministers of the Gospel on their Ordination and Installation to pastoral charge, and Rev. Loughrin having satisfactorily answered the same, was formally Ordained and Installed to the pastoral oversight of the Benhar Evangelical Church. Thereafter, upon the laying on of hands and prayer, Dr. McCrea and the Elders extended to Rev. Loughrin the right hand of fellowship.

Rev. McCrea gave an appropriate address and suitably exhorted Rev. Loughrin and his congregation. Public worship being ended, the service was closed in prayer.

THE ORIGIN OF BENHAR EVANGELICAL CHURCH

The Faith Mission was founded in 1886 for the promotion of spiritual life and godliness through the evangelising of the country districts of Scotland. One of the first areas of work was in Harthill - East and West Benhar in particular. Early records of the Faith Mission magazine 'Bright Words' indicate a mission held in West Benhar, taking place over the space of two months (from May - June 1890) when many were saved and were vibrant in the joy of the Lord.

A prayer union was established at that time with 80 members. During the 1890's many of the members were scattered and the Faith Mission conducted a further nine-week mission in 1899 and the prayer union was re-started with over 30 members.

In 1901 a hall was erected in West Benhar. It was a corrugated iron clad sectional building affectionately known as the 'Tin Hall'. It was dedicated as an evangelistic mission hall used exclusively for Christian work. In 1922 the Faith Mission held a mission in the West Benhar Hall when the Holy Spirit came down in revival power. There was such a consciousness of sin that miners were afraid to go down into the coal pit without getting right with God. As the mission progressed people came from the surrounding district and went home singing and rejoicing in their Saviour. God saved people in this revival who later became spiritual leaders for the Lord, notably Mr & Mrs David Weir, Mr George Drysdale and Mr Tom Paterson.

In 1929 West Benhar miners row was raised to the ground and the Hall was moved with the villagers into Eastfield where the work in the Hall continued until 1972 when new premises were opened to God's glory at Covenanter Road, Eastfield; the current location of  Benhar Evangelical Church.  The weekly prayer meeting continues to this day having now been in continuous existence for 100 years. The members of the present prayer group are looking to God for a fresh outpouring of the Holy Spirit in the salvation of many precious souls.

The following notes have been taken from the Faith Missions past writings, and gathered from paperwork from Benhar Evangelical Church members:

1922: In the coal mining village of West Benhar, a significant awakening began, occasioned by a visit from Faith Mission Pilgrims.  One who attended the meetings was schoolgirl Margaret (Pearl) Weir, whose father, Quintin Moore, had been converted through the Faith Mission (back in 1903).  Many decades later, Pearl recalled:

"I was the eldest of seven children. In 1922 when I was 13 years of age, the F.M. sent two lady Pilgrims to the village. Miss Woods was the senior Pilgrim. She came from Aberdeen. Miss Bruce, who was second in command, was a beautiful singer. Unfortunately, cars were few and far between in those days but my dad had a car and he brought the Pilgrims each night to the meetings. Miss Woods was the only Pilgrim I ever saw sitting to preach the gospel, but preach she did, and I remember her saying: "You and your namby pamby religion! You need to be born again!" Men and women and young people were born again, night after night. Sometimes there were as many people outside the hall as inside."

Pearl became involved in the West Benhar Prayer Union, which began as a result of the revival, and she and her husband were founder members of the Benhar Evangelical Church, which commenced in 1972.

As a result of her involvement in these organisations, and her warm and caring personality, Pearl came to be regarded as a ‘spiritual mother’ to many in the community.

An account of the 1922 revival at West Benhar is found in 'Glory in the Glen', authored by Mr. T. Lennie and published by Christian Focus in 2009. 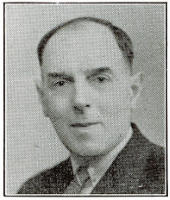 It was on October 15th, 1922, that I was saved. It came about in this way. Two of the Faith Mission Pilgrims were having a mission in West Benhar, and my oldest sister, who was a Christian, asked me if I would not come along to hear them. I decided to go. Pilgrim Bruce was the speaker that night, and the message was about the Broad and Narrow Way. The Spirit of God revealed to me that I was on the broad road leading to destruction. I would have yielded to Christ then and there, but "...the fear of man which bringeth a snare..." came upon me and I left the meeting under deep conviction of sin.

The next day the thought that kept coming before me was that I had to make a choice between Christ and the world. I went back again to the mission, where Pilgrim Wood preached on the Cross; that night at the close of the meeting I came by faith to the Cross of Calvary, claiming Christ as my Saviour, and I knew what it was to be saved by the grace of God.

Before this I had been full of my own self-righteousness, on which I was depending, thanking God that I was not as others. I had the idea that there were degrees in justification and that the harder I worked the more likely I would be to attain to heaven, but I discovered that a man could only be "...justified freely by His grace through the redemption that is in Christ Jesus."

Twenty-four years have passed since then, and I am still proving the joy of His salvation. I do not have to look back to something which happened in the past, but I have a present experience of His grace. His Word is a great delight to me, and I find in it adequate provision for the way. It is my one desire to press on, knowing that through Him we are well able to overcome, strengthened with all might according to His glorious power.

During all my Christian experience I have been a Prayer Union member, and look forward to the prayer meeting, where we pray for the work of the Pilgrims and the salvation of souls, seeking also to get a deeper sense of the holiness of God, that we may worship in the beauty of Holiness and yield our lives in service to Him.

So with banner unfurled to the breeze,
Our motto shall holiness be,
Till the crown at His hand we shall seize,
And the King in His glory we see.